JV Patrick Vale (Gresham, OR ’13-14) is a man of many talents. He is an avid runner and biker, a phenomenal singer, and a talented public speaker. Oh, and did we mention he’s fluent in Spanish? As the Anti-Poverty Specialist with Catholic Charities of Oregon Patrick works extensively with native Spanish speakers, so when St. Henry Parish was looking for a way to better engage Latino and Spanish-speaking parishioners, who better to step up than Patrick? Current board member and St. Henry’s parishioner Mary Ann Buck (Omak, WA ’68-70) explains how it all happened. 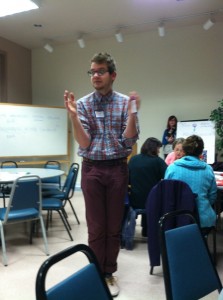 Many of the JVs are fluent in Spanish and some use it almost exclusively in their job placements.  Patrick Vale is one of them.  He works this year at El Programma Hispano in Gresham.

While attending Orientation last August, Sharon Williams, who was participating in the Jesuit Volunteer Encorps program, met Patrick and off-handedly asked him if he’d be willing to help people from the Gresham St. Henry Parish community learn Spanish.  Without hesitation he said, “Sure!”  And so the seed was planted for a Spanish language and culture class for parishioners, sponsored by the parish Peace and Justice Committee.

Sixty enthusiastic parishioners met for nine weeks on Monday evenings, learning basic Spanish phrases and structure from their teacher, ‘Patricio.’  His creative and informative style put folks at ease and before long, they were able to converse in some, albeit simple, sentences.  At the end of the nine week period, they celebrated with a fiesta and participated in a lively ‘Jeopardy’ style ‘final.’

But the learning won’t stop there.  Patrick is organizing an opportunity for class participants to team up, one on one, with clients from El Programma, so they can continue to build their Spanish skills, while helping clients hone their English skills.   And chances are relationships will develop between the two cultures which will break down more walls than language!

The classes were also featured in a story from the Catholic Sentinel and can be found here.