Just over two years ago, Fr. Jack Morris, SJ passed away. Jack was a co-founder of the Jesuit Volunteer Corps movement and a figure of great enthusiasm, wisdom, and grace to the thousands of JVs whose lives he touched. FJV Ryan O’Connell (Bethel, AK ’11-12) sent a brief memorial honoring the impact that Jack had on Ryan and all others who had the great fortune to meet him. Jack’s birthday was October 22nd, he would have turned 87. 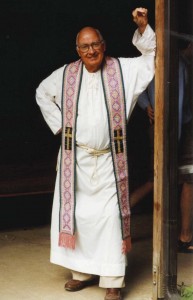 “Fr. Jack Morris, SJ was the rarest sort of person. He was a saint. He was a man of insight who could bear out all there is to Truth in a smile. He seemed peaceful in his pursuit of peace, and lived in graceful opposition to all forms of injustice and human suffering. He was the kind of priest that makes you proud of our priests. He was passionate, not moody, and remained in love with creation through eight decades, five wars, and two atomic bombs. He floored you with his experience, his walk across the world for nuclear disarmament just one story amongst many, many others. Fr. Jack humbled me in my normalcy.

He specialized in restoration. As an architect of the Jesuit Volunteer Corps, he brought forth women and men to be ruined for life and born again to a world of pain, loneliness, and change. Those of us who never before saw the world as Fr. Jack did met him for less than a week during Orientation at a camp in rural Oregon. He converted so many of us: cradled Catholics still at the age of 21. He prayed us off to the Cascades, the prairies, and the tundra while we prayed simply for the desire to pray.

He was a perfect usher to the joyful mysteries of Christian living, and the kind of man that deserves a memorial two years after losing his battle with cancer, even if he never knew my name. Thank you, Father Jack, in your language I pray:

Mighty God, Father of all,

Compassionate God, Mother of all,

Bless every person I have met,

Every face I have seen,

Every voice I have heard

Especially those most dear;

Bless every city, town, and

Street that I have known,

Bless every sight I have seen,

Every sound I have heard,

Every object I have touched.

In some mysterious way these

Have all fashioned my life;

All that I am,