Before his death in 2012, Jack Morris, S.J., had been busy compiling his life’s story and work into a book. Now, thanks to the tireless help of personal friend, and JVC Northwest Board member, Barbara Scharff, Jack’s story is now available for all to explore and enjoy. Below, Barb shares a bit of her journey in working with Jack to make this book a reality. 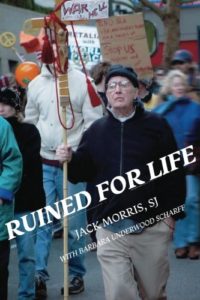 “Jack Morris was an extraordinary Jesuit who worked for peace until his death.  I first met Jack in the 1990s, when we were both working with the Jesuit Refugee Service in East Africa – he in Uganda, me in Kenya. Jack’s lifelong work for peace offers us a question: How do we put peace in the center of the church’s thinking? Jack was the founder of the Jesuit Volunteer Corps movement, which has enabled thousands of college graduates to serve the poor, experience Christian community, deepen their prayer, and meet God in surprising new ways.”

– JAMES MARTIN, S.J., Editor at large, America Magazine; author of The Jesuit Guide to (Almost) Everything, and Between Heaven and Mirth

Jack died before completing his book. His writing was years in the making because he was so busy giving and living life fully. Hundreds of people knew and dearly loved Jack, each claiming a small part of the weave. I entered the story and began to pick up the glistening threads in June 2011 when I spent eight months interviewing him about his philosophy and life experiences. Before Jack’s passing in September 2012, he placed in my care the half-finished project and asked me to complete it. I made him a promise, so I assembled, compiled, co-wrote, researched, and edited the manuscript, drawing rich material from boxes of his personal journals, letters, poetry, homilies, newsletters, and news articles Jack entrusted to me.

Now we have “Ruined For Life!” I invite you to come and travel with Jack through his inimitable storytelling. You’ll roam through his spacious Montana childhood, summer in the circus, the call of joining the Jesuits, and his challenging formation as a priest. He’ll tell you how he developed the Jesuit Volunteer Corps movement, and how the crazy idea of the Bethlehem Peace Pilgrimage inspired him to walk almost 7,000 miles with others from Bangor, Washington to the Holy Land to protest nuclear weapons of mass destruction. He shares what a tender grace it was to care for his dying mother, and his Jesuit Refugee Service years in companionship with Sudanese refugees in northern Uganda.

A pilgrim, philosopher, and gypsy at heart, he changed every soul he encountered by pointing the way to Christ’s love and mercy. Jack has passed, but thankfully he passed on to us his poignant memories of a life lived on the frontiers of the heart.

As we celebrate 60 years of Jesuit Volunteers, we are so glad to have Jack’s story come to life on the page for a new generation of volunteers, as well as those that knew him personally. The book can be purchased at our upcoming 60th Anniversary celebration and fundraiser in Portland, OR on June 18th at Jesuit High School, or through Amazon Smile here.