Katie Hanson, a JV AmeriCorps member in Omak, WA, reflects on the process of working with Moses*, a kindergartner at Paschal Sherman Indian School.  Moses had fallen far behind his classmates, and Katie was assigned as a tutor to help him learn the alphabet. During their tutoring sessions, it was clear that he needed an incentive to help him stay focused, and Katie’s creative idea, as told by her below, was just the ticket to get Moses excited to learn:

I had always thought it would be cool to buzz off my hair and donate it. I had been 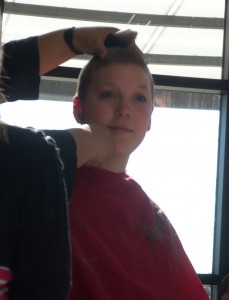 toying with the idea for the past couple months, so I decided that the big haircut could be an incentive for my student, Moses.  When I told him about the idea during one of our first tutoring sessions he didn’t really believe me. He thought I was pretty crazy. But when he went back into the classroom, the first thing he did was tell his best friend what I was going to do. At that point, I knew it was going to be good motivation — and I also knew I couldn’t back out. Moses began telling lots of people at school: his teacher, his classmates, his siblings, my supervisor. Soon almost everyone at school knew of our deal and wanted to help Moses succeed in learning his letters and sounds and getting me to cut off all my hair.

After working together for about 2 months  twice a day, every day, I could tell that Moses was ready. On a Tuesday morning in late February I tested Moses on his alphabet and sure enough, he passed! He was excited and so was the rest of the school. My supervisor made an announcement over the school loud speaker that Moses had passed the test. The entire school then assembled in the foyer as my hair was cut off by another teacher. The students were extremely excited, Moses was a little shy, but I could tell he was excited too. So, the hair was cut off and two 14-inch braids were donated to Locks of Love to be made into a wig.

It was a great experience to get the whole school excited and invested in the academic career of a student who had fallen behind. Moses and I continue to work together twice a day to bring him up to speed. He has moved on from letters and has now begun to read. He can now read some words on his own, and I hope he will be reading books by the end of the school year in June. My time at Paschal Sherman has taught me a lot, more than I could ever teach Moses or any of the other kids. I am thankful for my time here everyday.

*name has been changed