The 2014-15 JVs are off and running in their new communities and the dust of Orientation has settled. Over 80 presenters, FJVs, Jesuits, JV EnCorps members, Board members, support people, staff, and friends came out to assist and support the incoming JVs throughout the week of Orientation, but many more were unable to share in the experience of Orientation directly. Lucky for you, we’ve created a photo recap to help recreate the experience. Enjoy! 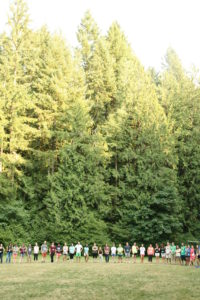 This year we welcomed 148 JVs to beautiful Camp Adams outside Portland, OR for Orientation, August 4-9. As seen in this photo, we gathered in a circle for a traditional welcome ceremony from Rose High Bear, who heads Wisdom of the Elders, an organization “that records and preserves traditional cultural values, oral history, prophesy, and other messages of guidance from indigenous Elders in order to regenerate the greatness of culture among today’s and future generations of native peoples.” 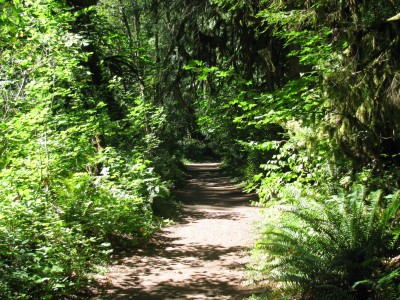 Camp Adams is nestled in the beautiful forests near Molalla, OR, a town of only 8,200 people. This picture was taken on the path that leads from upper camp, where buses drop JVs off, to lower camp, where most of the week’s activities take place. 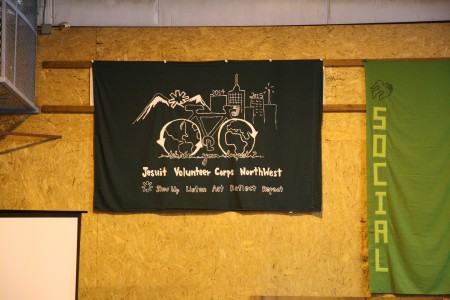 Here you see the banner for this year’s Orientation theme, which was “What’s Your Impact?*” The asterisk adds, “Show Up, Listen, Act, Reflect, Repeat.” The theme seeks to inspire JVs to think about the impact they are having on the community in which they would serve, as well as the impact that same community will have on them. 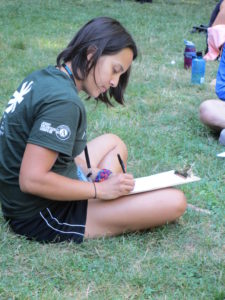 JVs spent a lot of time thinking and reflecting on the material presented to them throughout the week. Here we see Theresa Reynolds (Juneau, AK ’14-15) pensively journaling in the meadow. 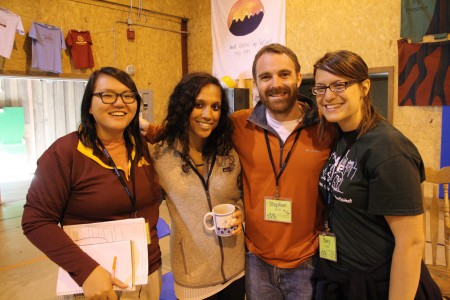 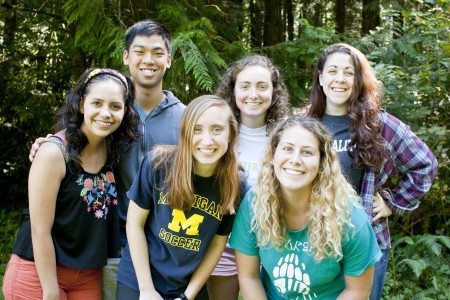 Picture day proved to be chaotic as always, but also a lot of fun. The Hillsboro JVs flash their grills here as Mother Nature provides the perfect backdrop. However… 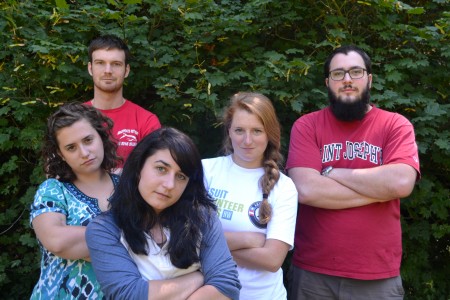 …picture day can also be a very serious time, as evidenced by the Missoula JVs. 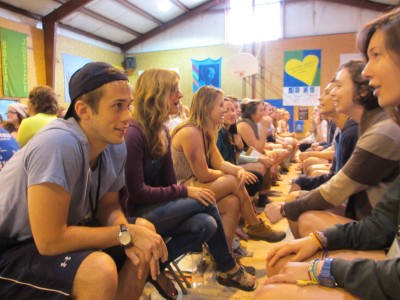 JVC Northwest Orientation is the one time of year where all 148 JVs are together. Chris Tansey (St. Xavier, MT ’14-15) takes advantage of that limited time here. 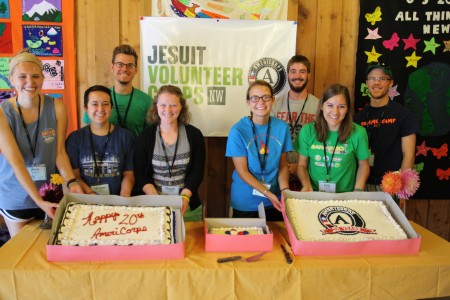 JVC Northwest is proud to be a partner with AmeriCorps and we took the chance to celebrate AmeriCorps’ 20th anniversary with some scrumptious cake. Needless to say the JVs were pleased. 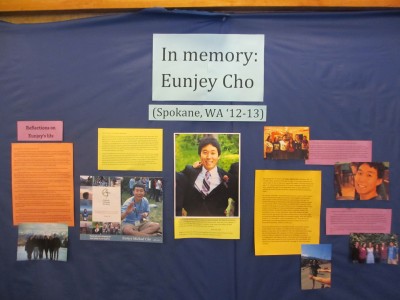 JVC Northwest honored FJV Eunjey Cho (Spokane, WA ’12-13), with  these stories and photos posted at Orientation. Eunjey was killed shortly after his JV year when he was hit by a car while he and a fellow FJV cycled across the county from Spokane to Eunjey’s hometown.  We remembered and honored Eunjey this year during our Missioning Mass. 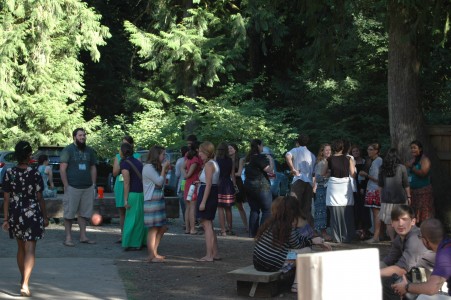 Friday of Orientation week meant it was time for the Banquet and Missioning Liturgy. Former JVs, Board members, support people, Jesuits, and friends braved Portland traffic to join the incoming JVs for a nice meal and mass where they were missioned off to their year of service. 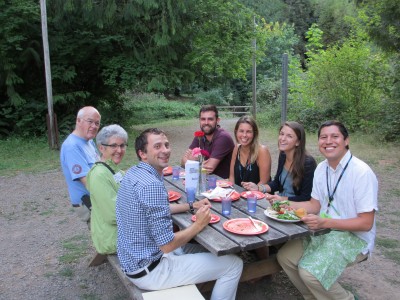 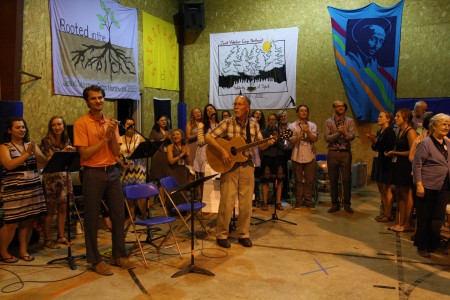 The Missioning Liturgy followed the Banquet, with the choir led by the one and only Mike Benton. Mike has led the music at Orientation for the past 23 years. 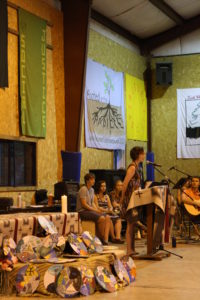 Second year JV Shannon Cogan (Bethel, AK ’13-14, Portland, OR ’14-15) gave a beautiful reflection on her time serving in rural Alaska. A copy of that reflection can be found here. 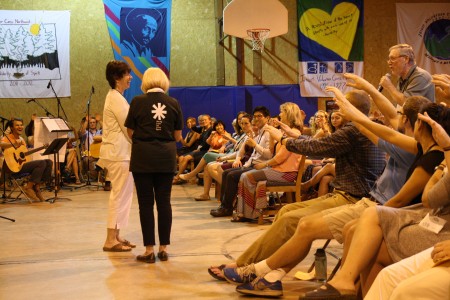 As a special surprise during the Missioning Liturgy, Board Chair June Cooley (right) presented Jeanne Haster (left) with a special Jerusalem cross to thank and honor her for her 10th anniversary of serving as Executive Director. The cross was made by second year JV Cecilia Rehm (Ashland, MT ’13-14, Gresham, OR ’14-15). 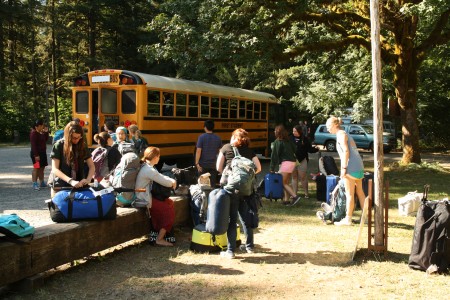 The morning following the Banquet and Missioning marked the departure of the JVs for their service locales. An emotional end to the week but a beautiful beginning to the year. 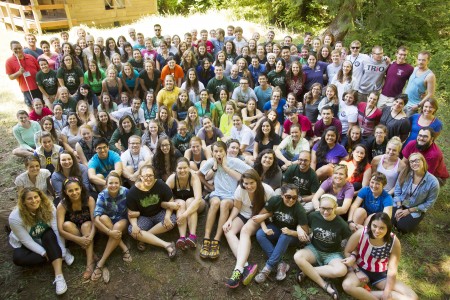 And with all that, Orientation 2014 is in the books. We are thankful for the 148 individuals who went through this whirlwind week and took the plunge into intentional living centered around community, social & ecological justice, simple living, and spirituality. We wish them, and all who made the week possible, nothing but the absolute best.

More photos from Orientation can be found at the links below!