JVC Northwest has been a partner and grant recipient of the Forum for Theological Exploration (FTE) since 2010, which has allowed us to offer more opportunities for current and former volunteers to explore their purpose and call through retreats, spiritual direction, and discernment. In the following post you can read about the impact a recent FTE retreat in California had on several current JVs. 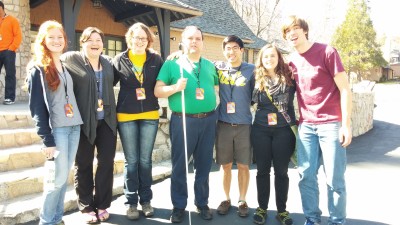 Seven current JVs, (from left in picture) Sarah Moore (Grays Harbor, WA ’14-15), Bridget Kratz (Spokane, WA ’13-14, Sitka, AK ’14-15), Lynsey Spaeth (Bethel, AK ’13-14, Hood River, OR ’14-15), David Paullin (Spokane, WA ’14-15), Spencer Uemara (Hays, MT ’14-15), Brianna Trifiletti (Omak, WA ’14-15), and Scott Jackson (Gresham, OR ’14-15), were given the chance to attend a Regional Discernment Retreat in Lake Arrowhead, CA (near San Bernardino) at the end of February. According to the FTE website, “The FTE Regional Discernment Retreat gathers a diverse group of young adults in an ecumenical meeting with Christian leaders who are engaging the world through their faith. The Regional Discernment Retreat offers an opportunity for young adults to discern their purpose and call through worship, conversation with peers and leaders in ministry, and exposure to innovative models of ministry”. 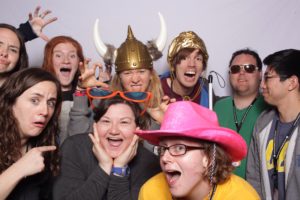 JVs were nominated to attend the retreat, and then completed a formal application from FTE before being considered. A testament to the strength of the JVs who were nominated, all seven applicants were admitted to the retreat. The entire retreat, including travel for the JVs, was generously funded by FTE, allowing JVC Northwest to send JVs from remote locations, like Spencer (Hays, MT), Bridget (Sitka, AK), and Brianna (Omak, WA).

The attendees were grateful and full of praise for the retreat, as demonstrated by feedback they shared with JV Program Manager Amy Potthast:

“The retreat itself was really phenomenal… The conversation partners that I am walking away with and the experience of being in a group of leaders really fueled up to do God’s work was such a blessing. I didn’t really know what to expect going into it but walking away I have truly clarified the discernment questions underlying all of my vocational question and have found people to continue these conversations with. This was such a great opportunity and I am so thankful [FTE and JVC Northwest] afforded it to us.” – Brianna

“Thanks again for the wonderful opportunity to go on the FTE retreat. I had such a great weekend at Lake Arrowhead and have some new tools to help me in my discernment process. The workshops were great. I loved hearing from the speakers and getting to know more about their journeys. I am very grateful for being selected.” – Lynsey

“I just got back from the retreat and…the retreat itself ended up being a really beneficial time to reflect on what God’s done in my life this year and where I see Him directing me in the future. It was especially neat to talk with other young adults in similar justice-related and faith-based service programs and see how their experiences were similar to my own. My time this weekend makes me all the more excited to hear the results of my second year in the placement matching process…” – Spencer

We look forward to working with FTE on more opportunities for future JVs to engage in similar experiences. We are also excited about our own upcoming former volunteer retreats (including one next month!) in 2015 and 2016, which were also made possible through FTE’s support.

If you’d like to learn more about FTE, and the work they do across the country, you can find their website here.